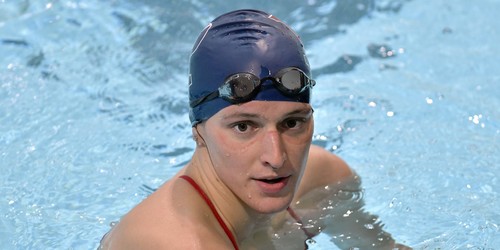 “How much do you think the cancel culture, woke debate, is now beginning to really damage the Democrats? And I’ll give you the example that’s been raging recently, this whole issue of transgender athletes in sport, for example. Women’s sport. Lia Thomas, the swimmer. I think it’s grotesquely unfair,” Morgan said.

“You can support trans rights to equality and fairness, but also understand that what’s going on in sport is inherently unfair and unjust and unequal. Is that your position?” Morgan added.

“People see it and they won’t put up with it,” Trump responded. “They had a weight lifter where the record was, for 11 or 12 years, and they’d put a half-an-ounce on each side, the woman would lift – a guy comes along and breaks the record by numbers you would never –”

“Do you agree with that?”

“I do. I do. I agreed with that long before anybody else,” Trump said. “I think it’s ridiculous and it’s sad and it’s bad for the Democrats because they’re not going to do that.”

Trump then slammed biological male swimmer Will “Lia” Thomas, who competed against women for the University of Pennsylvania and recently won first place in the NCAA women’s championships, as Rebecca covered.

“A woman is somebody that swims at a certain time and doesn’t get beaten by 38 seconds by somebody that wasn’t even a good swimmer as a male,” he said.

In the same interview, Trump slammed Prince Harry and Meghan Markle, saying that Queen Elizabeth II should revoke their royal titles, as Townhall covered. To recap, in 2021, Harry and Markle left their royal duties and moved to California and sat down with Oprah in an explosive interview where they discussed the British royal family.

Weeks later, the couple made headlines weeks later when Prince Philip, Duke of Edinburgh, passed away at age 99. Markle did not attend his funeral.

“I’m not a fan of Meghan. I’m not a fan. And I wasn’t right from the beginning,” Trump told Morgan. “I think poor Harry is being led around by his nose.”

Trump added that he predicts Harry and Markle’s marriage will end “bad” and told Morgan that he disagrees with the Queen for not removing their titles.

“If you were the Queen, is it of the stage now, would you remove their royal titles?” Morgan pressed.

Join 708 other subscribers
Follow The Trailblazing Patriot on WordPress.com