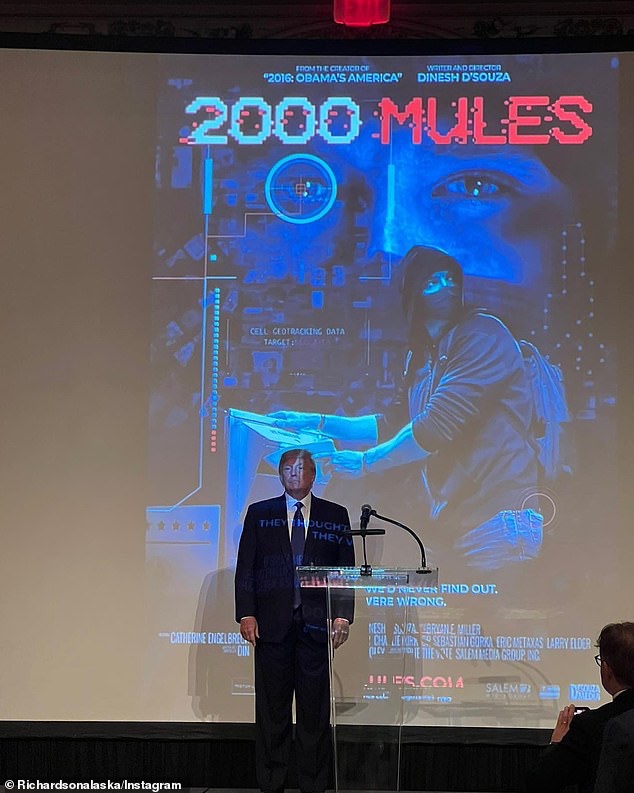 After a weekend of exclusive parties in Washington, DC and New York City for much of the media sphere, Donald Trump held his own red carpet event at Mar-a-Lago on Wednesday night.

Among the guests pictured at the event was Kyle Rittenhouse, the teenager who was ruled to be not guilty after killing two people at an anti-police protest in Kenosha, Wisconsin in August 2020.

Greene shared a photo on Instagram of herself at Mar-a-Lago along with Dr. Martin Luther King Jr.’s niece Alveda King.

It’s not clear if Greene and Boebert spoke at the event, after it was reported last week that they had an argument so explosive that it had to be broken up by another House GOP colleague.

Gidley had previously attended the White House Correspondents Dinner in Washington on Saturday night, after which a number of journalists and officials have already tested positive for COVID-19.

Pro-Trump celebrities like Kevin Sorbo and Kristy Swanson were also pictured at the premiere, as was the ex-president’s former lawyers Rudy Giuliani and Jenna Ellis.

A video of Trump arriving at the elaborate event was posted on Instagram by conservative activist David Harris Jr.

‘This man – not only is he a fighter, not only does he never back down, but he’s smart,’ a woman’s voice can be heard saying as the room focuses on the former president.

She continued, ‘He has always been right. Please join me in welcoming the 45th President of the United States, Donald J. Trump.’

The room erupted into applause and chants of ‘USA’ as Trump approached the stage.

Another clip, this time of Trump speaking in front of an enthusiastic and formally-dressed crowd, shows the former president rehashing his same complaints about the previous election.

‘We have to do something that’s very important. We have to go to voter ID immediately,’ Trump said as the room applauded approvingly.

He continued, ‘You know, when you went to the Democrat National Convention, you had a voter ID that was the size of most people’s chests. Large people. Large, large people. The thing was like, hung around — they needed the chain.’

Trump gestured around his neck. It’s not clear what he was referring to.

‘You walk in, it had your picture, it had fingerprints, it had your everything. It probably had your social security number on it even though you’re not supposed to have that,’ he continued.

‘But you know what, it was the greatest voter ID I’ve ever seen. But when it comes to voting in the election, they don’t want that, because they wanna cheat. And you know what? I said it, and I’ve been saying it a lot lately, I don’t believe they’re a 50-50 party. I think they cheat in elections.’

The former president then accused Democrats of being ‘against oil, guns and god.’

It’s not clear if any of the former president’s children attended the red carpet event, though his son Donald Trump Jr.’s fiancée Kimberly Guilfoyle was pictured chatting with other guests.

He spoke with the Democrat-led panel remotely and was reportedly at least somewhat cooperative.

The committee’s investigation has been rapidly honing in on the former president’s role in fomenting the insurrection last year and his and his allies’ attempts to overturn the 2020 election results.

Another video from the event also posted by Harris appears to be selling right-wing novelty products from his site — featuring ex-Trump national security adviser Michael Flynn.

‘I love this, where can I get a deck of these?’ Flynn says holding up playing cards.

The Joker card is superimposed with an image of President Joe Biden’s face.

‘You got the name wrong, it’s Brandon,’ Flynn quipped in reference to the ‘Let’s Go Brandon’ phrase adopted by the right wing to mock Biden.

Another Joker card features Dr. Anthony Fauci with ‘five masks,’ according to the person recording the video.

‘This is Brandon minus. This is the cousin – the lesser cousin of Brandon,’ Flynn said.

Join 708 other subscribers
Follow The Trailblazing Patriot on WordPress.com